At only 25 years old, Xirena was already on her fourth marriage — and it looked as though even it wouldn’t last much longer. In her area of Angola, couples don’t go to counselling to work out their issues, and they don’t learn to live with unhappy marriages. When there’s a problem, they simply move on. “If the woman is not respectful toward her husband, she risks being replaced,” says Sara Antonio, National Director of Every Home for Christ Angola.

It had happened to Xirena before. Her family rejected her when she dropped out of school to elope with her first husband, and they blamed her when every subsequent marriage failed just like the first. The truth was that Xirena longed to be loved, but she feared being controlled. And this fear led her to openly disrespect the men in her life. She fought and shamed them at home, and she fought and shamed them in public. Unwilling to take responsibility for her own disparaging behaviour, she had unintentionally driven them away. Now, it was happening again.

News reached Xirena that her husband, Carlitos, had been seen around the community with other women. In an instant, Xirena was swallowed up by the same fear and heartbreak that had become all too familiar. Another marriage was falling apart. Carlitos stayed away for days at a time, leaving Xirena to cry herself to sleep as she wondered who he was with that night. Soon, Carlitos wasn’t even trying to hide his affairs anymore. He wanted Xirena to know about them. “He was now doing it in the open so that Xirena would leave his house,” Sara says. “He no longer loved her.”

As her lonely nights added up, Xirena grew bitter. She saw men as vultures picking apart the pieces of her heart. But Carlitos was her last chance. If he left her like the others, she wasn’t likely to find a fifth husband to take care of her. She would starve, and her family would say she deserved it. Alone and outcast, Xirena contemplated taking her own life. She had tried in the past. Maybe this time, her despair would be enough to make her go through with it. Xirena anxiously watched the door of her home, hoping Carlitos would come back through it. Then one day, a knock came at that door. To her dismay, it wasn’t Carlitos returning to her. It was three young people her age. Suspicious of these strangers, Xirena stepped outside and closed the door behind her, making it clear they were not invited in. The visitors were evangelists with Every Home for Christ Angola, and they had come to share the Gospel with Xirena. Immediately, she regretted answering the door. “Most people in Angola perceive Christianity negatively,” Sara says.

“They feel it doesn’t give them the immediate answers they need.” For Xirena, the conversation with our workers couldn’t end fast enough. She accepted the gospel messages they gave her and quickly went back inside, relieved to see them move on to the next house. She decided that, if they tried to come back, she would slam the door in their faces. But as Xirena sat, staring anxiously at the door once more, the messages the workers had given her caught her attention. 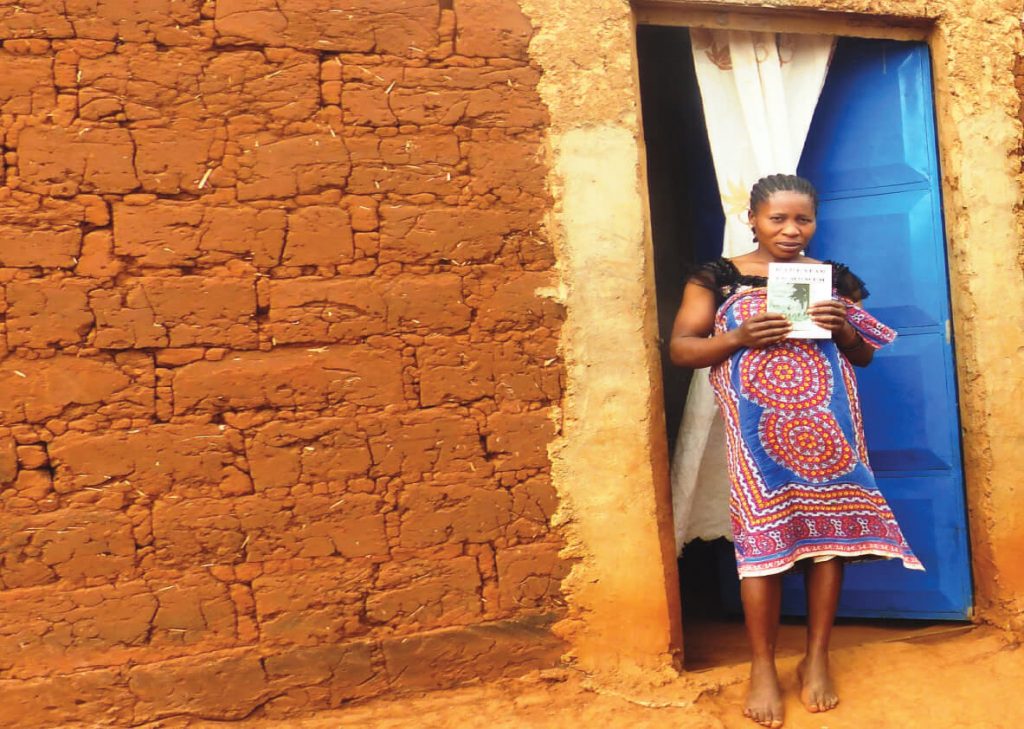 One was called “The Power of God” and the other “How to Know God”. With no better way to pass her time, she opened one and began to read it. It was a casual decision that proved to have eternal consequences. “After reading the gospel messages, I felt something unusual in my spirit,” Xirena says. “I felt like there was hope somewhere, and I needed that hope.” Xirena saw a phone number written on the back of the messages. The next day, she sent a text message to the number, inviting the EHC evangelists back to her home. The three young people were overjoyed to receive her text. Getting one response was like having a whole world of responses; it was something worth celebrating. Within hours, they were back on Xirena’s doorstep. This time, she opened the door and invited them in.

Our evangelists shared the Gospel with Xirena and prayed with her, and she gave her life to Jesus that day. It was like a heavy stone had been removed from Xirena’s heart. She quickly joined an EHC Christ Group in her area and began to grow in her newfound faith.

When Carlitos eventually returned home, he found a very different woman awaiting him. Xirena didn’t yell at him, berate him or condemn him as he had come to expect. Instead, she showed him kindness, humility and gentleness. For the first time after a long season, Xirena showed Carlitos love — and it changed their home. “They fell in love again, and this made them rekindle their first days,” Sara says. Xirena even confessed her disrespect to Carlitos, and she asked him to forgive her for the way she had behaved. It was a genuine apology, and it came with no expectation that Carlitos should apologise for his philandering. Xirena was sorry, and her meekness and repentance was unlike anything Carlitos had ever experienced.

Baffled by the difference he saw in his wife, Carlitos wondered what had happened to bring about such an unlikely change in her heart. Intrigued, he attended Xirena’s Christ Group with her. There, he heard the Gospel, and he felt the conviction of the Holy Spirit in his heart. Like Xirena, Carlitos also repented and gave his life to Jesus. “Carlitos told Xirena he will never again go for other women,” Sara says. Xirena had been difficult, and Carlitos had cheated.

He had wanted to end their marriage, and she had wanted to end her life. But when Xirena met Jesus, everything changed. She became softer, and Carlitos became faithful. Their marriage was saved, and now they’re walking with God together, filled with the hope of a new life. But none of it would have happened if three young evangelists hadn’t left their phone number and a gospel message.